A 45-year-old man identified as Kwadwo Adusei aka Desco has been arrested for reportedly killing his friend at Wawaase in Afigya Kwabre South of Ashanti Region of Ghana.

The suspect reportedly killed his friend after he dreamt that he was having sex with his wife.

He reportedly lured the deceased identified as 48-year-old Kwesi Banahene, to a bush where he stabbed him multiple times all over his body.

The deceased’s body was found in the bush after a search team was deployed to look for him after he was reported missing for days.

The murderer, according to reports, then attempted to kill his own grandfather after taking the life of his friend. He reportedly accused his grandfather of taking his manhood and thereby rendering him impotent.

His grandfather survived the attack and is currently being treated at Ankaase Hospital. 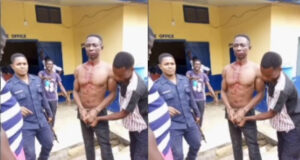 Desco told newsmen that his dreams always come to pass and he couldn’t wait for this one to manifest, which is why he moved in swiftly to avert it.

Cheating is a sign of general dissatisfaction in the relationship. However, it can also be a person’s pattern.

There are reasons why wives cheat on their husbands, they include:

There can be reasons why women cheat but there are certain mechanisms in a person that draws them towards infidelity.

These reasons are outlined below:

*Women with poor communication skills finally end up cheating because they are not able to communicate their needs to their husbands, and thus, misunderstandings tend to grow with time.

*Women with control issues can also give in to cheating as they have the tendency to find a new spark every now and then.

*Women with narcissistic tendencies could be prone to cheating as they are not thinking about their partners and only about themselves and their fulfillment.

From “God when” to “God forbid” – Woman who flaunted…

10 ways to connect with your teenager