The husband of Kenya’s two-time World Championship bronze medallist, Agnes Tirop, who was found stabbed to death,  is being treated as a suspect in the murder investigation.

The 25-year-old long-distance runner, who represented Kenya at the Tokyo Olympics, was found dead in her house in Iten, Elgeyo Marakwet County on Wednesday, October 13.

Chairperson of Athletics Kenya in the Nairobi Region, Barnaba Korir, who confirmed the tragic news, said the deceased had stab wounds in the abdomen.

A criminal investigation is under way, with her husband now at the centre of it. Police say he has gone missing and they are searching for him. 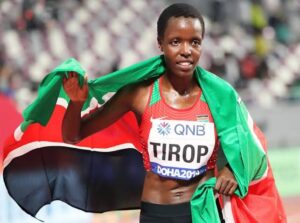 He said: “When police went to Tirop’s house they found her in bed with blood under the bed and a lot of it on the floor.

“When police looked at the body, it looked like she had been stabbed on the neck with what we suspect to be a knife.”

Police have also said there may have been a domestic dispute between Tirop and her husband because her car had its windscreen and windows smashed in.

According to BBC, Tirop also suffered a stab wound to her stomach as well as the one found on her neck.

Crime scene investigators were present at the house on Wednesday.

The 25-year-old long-distance runner, who represented Kenya at the Tokyo Olympics, was found dead in her house in Iten, Elgeyo Marakwet County on Wednesday, October 13.

Tirop smashed the 10km World record on September 12, 2021. She clocked 30:01 to shave 28 seconds from the previous women-only 10km road record held by Asmae Leghzaoui of Morrocco from 2002.

Why women are crumbling under the weight of abusive…