Kenyan police on Thursday arrested the husband of record-breaking runner Agnes Tirop, who was stabbed to death in a killing that has shocked her home country and the world of athletics.

Emmanuel Rotich was nabbed in the coastal city of Mombasa over the death of the 25-year-old double world championships medallist and Olympian, who has been hailed as a rising star cut short in her prime.

“He is in custody and he was arrested while fleeing,” George Kinoti, the Director of Criminal Investigations, told AFP, as police issued pictures of the suspect in handcuffs.

Kinoti said Rotich was expected to appear in court on Friday, adding: “He will face charges once investigations are completed.”

Newspapers in Kenya reported that the couple were having marital problems. 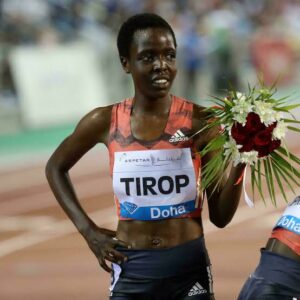 Tributes have poured in for Tirop since her body was found with stab wounds in the bedroom of their home in Iten in western Kenya, a high-altitude training hub for many top-class athletes.

“Murder of a champ,” was the front-page headline in Kenya’s Daily Nation newspaper.

Athletics Kenya said it was postponing events for two weeks in honour of Tirop and another runner who was found dead at the weekend of an apparent suicide.

Athletics Kenya president Jackson Tuwei said Tirop’s death was a “huge blow” to athletics, describing her as “one of the fastest rising stars” and voicing hope for speedy justice. 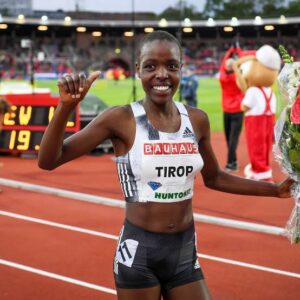 Mourners, some in tears, gathered at the family home in the village of Kapnyamisa, which lies about two hours’ drive from Iten.

Her mother Dinah Tirop spoke with sadness at the loss of her daughter, the family breadwinner who paid for children’s school fees and clothes.

“When we got the news it was really saddening, because Agnes has been a good person since she was young and Agnes has never been in any conflict with anyone,” added her brother Josephat Keter.

Tirop was killed just a month after she smashed the women-only 10km world record at an event in Germany. She was a double world 10,000m bronze medallist and 2015 world cross county champion and finished fourth in the 5,000m at the Tokyo Olympics this year.

Agnes Tirop also made history in 2015 when she became the second-youngest ever gold medallist in the women’s cross country championships after Zola Budd.

Toni Tones reveals why men hate women who empower other…