Njideka Iheme, daughter of former Rivers State Governor, Peter Odili and Justice Mary Odili, has been sworn in as a Judge of the Federal High Court.

The Chief Justice of Nigeria, Honourable Justice Ibrahim Tanko Muhammad, swore in Mrs Iheme and and 20 others as Judges of the Federal Capital Territory High Court, on Tuesday 23rd November 2021. 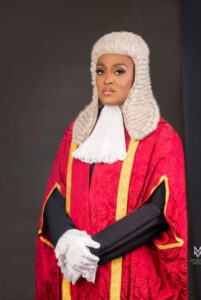 The High court has unlimited jurisdiction to hear and determine any civil and criminal proceedings under any law of the state. There is a Sharia Court of Appeal and a Customary Court of Appeal for any State that requires any of them.

The federal high court in Nigeria composition is the Chief Justice, and the President of the Court of Appeal, and the two Chief Judges of the two high courts, including four but not more than eleven other judges.
All the proceedings carried out in the high court are done according to what Section 74 of the Courts of Judicature Act 1964 prescribed.

A woman who doesn’t care about pleasing society is…

Women like me bend but don’t break -Ini Abimbola

Why women should let go of dead relationships