Big Brother Naija star, Ifu Ennada has described herself as a child of God with Ashawo vibes in new bikini pictures.

The entrepreneur, who is currently holidaying in Dubai, shared some sexy bikini photos on her Instagram page on Thursday.

She captioned the post: “Child of God with Ashawo vibes. My next man go enjoy die.”

Ifu Ennada was born on July 23 as Iheme Faith Uloma.  She is  an actress, fashion designer and a former BBNaija housemate.

Ifu Ennada is also known for winning the AMAA award for Best Young and Promising Actor in the movie O-Town. 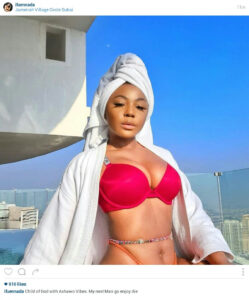 Ennada was born in Abia State, Nigeria but was raised in Lagos. She studied Computer Science at Olabisi Onabanjo University where she obtained her BSc.

She began her movie career in 2019 and in 2016, she was nominated for Best Young/Promising Actor in the movie O-Town at the AMAA awards 2016.

Ifu Ennada revealed that she had been sexually harassed in 2016.

In 2018, she participated in the Big Brother Naija game show.

The truth is in 2016, I was raped by someone in the entertainment industry, before then I was a Virgin.

“This person also infected me with an STI. “I was also threatened by this person and was very scared of social media’s bashing with the usual questions of “what was she wearing!’’ “why did she go to his house?’’

“So in all my sadness and depression, I decided to tell the world what had happened to me using film as a medium.

“I was inspired to write and produce my film `Tears of A Broken Virgin’. I got a lot of help from social media.

“People volunteered to work for me free of charge even my director – Benny Atagame Alli.

“Though some parts of my film are fiction, the bulk of it was inspired by my story. The lead character’s name is Ada which is a short form of my name Adanne- popularly pronounced as Ennada.

“I can never be silenced” actress Iyabo Ojo…

How do you snatch a man?

How this wife handled her husband’s childish behaviour…