A Twitter user has narrated how his dad razed down his mum’s shop out of jealousy when she started a successful business.

A lady took to the micro-blogging platform to blame Nollywood for the misconceptions about the Igbo culture and patriarchy.

According to the lady, contrary to what Nollywood portrays about patriarchy, it was built to favor and protect women. 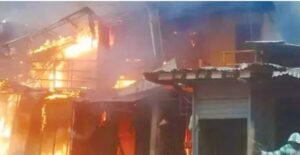 “I blame Nollywood for the misconceptions about Igbo culture. Patriarchy was basically built to favour and protect women, but the picture painted makes it seem like women are oppressed. Well, people like negative stories”.

Reacting to the lady’s tweet, the man with the Twitter handle @nelsoncj3, negated her claims that Patriarchy was built to protect women. To back up his stance, he narrated his father’s reaction when his mother started a business that was booming.

He stated that his father got jealous that his wife was running a successful business and burnt down her shop.

“You know what my father did when my started a hugely successful kerosene business? He got jealous and burnt her shop, then destroyed her wares. But sure patriarchy protects women”, he wrote.

On social media, the comments on this post are sad, eye opening and scary. It is sad that a lot of men are so insecure that they prefer to have dependent women rather than successful ones. It’s pathetic to say the least. These are the kind of men I call enemies of progress.

As success and ambition are qualities most women take into effect when selecting a mate, a man’s ego can suffer greatly when he feels as though he is not seen as superior in these categories.

These feelings, in turn, can cause him to project these insecurities into the relationship, making its long-term success unfavorable.

If a man feels threatened by your success, you will likely feel this power struggle in one way or another.

When you know what you are looking for, calling out these insecurities can help you to avoid choosing a partner who may not have your best interests at heart.

As a woman in Nigeria, you shouldn’t get married to a man who wants you to be dependent on him financially. He will frustrate you.

Pastor arrested for allegedly conniving with his wife to…

10 signs you have self abandonment issues in relationships