The Commissioner of Police in Lagos state, Hakeem Odumosu, said three students of Dowen College, Lekki Lagos are currently assisting the police in their investigation into the death of 11-year-old Sylvester Oromoni junior.

Odumosu disclosed this in an interview with Channels TV.

The police boss said three of the five students mentioned by Sylvester before he died are already in custody and cooperating with the police in their findings. 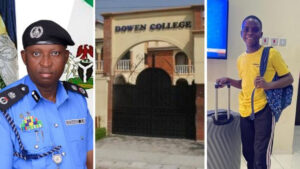 Although Odumosu did not give the identities of those in custody, he insisted that they are key suspects.

The police boss explained that the Command is set to go for the post mortem of the body in Delta state to ascertain the cause of death.

He assured that police authorities in both Lagos and Delta State are keenly interested in the outcome of the investigation to unravel the mystery behind Sylvester’s death.

Sylvester, who was 11 and would have turned 12 on December 4, died on Tuesday, November 30 after he was allegedly attacked by some of his seniors in school who had allegedly subjected him to constant bullying.

The family of late 12-year-old Sylvester Oromoni, a student of Dowen College, has hired the firm of human rights lawyer and activist, Femi Falana, to prosecute the case against the institution over the unfortunate death of their son.

In the letter dated December 6, 2021, and signed by Taiwo Olawale, the lawyers have written to the office of Lagos State’s chief coroner requesting an inquest into the circumstances leading to the death of his client’s child.

The letter titled “Request for Inquest into the Tragic Death of Sylvester Oromoni killed at Dowen College, Lekki, Lagos,” noted that based on the briefings by the family, the late student died as a result of injuries allegedly inflicted on him by his seniors at the school.”

May the soul of the departed rest in peace.

Sylvester Oromoni’s father makes four demands after son’s death, vows not to bury him until they are met

‘I’m looking for a man who can cook and clean 24/7’ says Bridget Otoo, Ghanaian media personality

Why do men think women don’t deserve to choose their…