In September 2021, Tonto Dikeh set Nigerian social media space on fire after she alleged that her ex-lover, Prince Kpokpogri has in his possession, sex tapes of married Instagram dancer, Janemena and many other married women, celebrities he slept with. 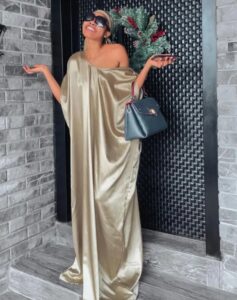 Reacting to Tonto’s allegation, Janemena filed a petition before the Nigerian Police against the actress over claims of cyberstalking and defamation.

In her petition, Janemena who claimed Tonto’s allegations brought her to public ridicule, odium, and opprobrium in the comity of Isoko women, her business associates, friends, members of her family, demanded a retraction of the said publications by Tonto Dikeh on her social media handles and a publication of the retraction in four national dailies in Nigeria. 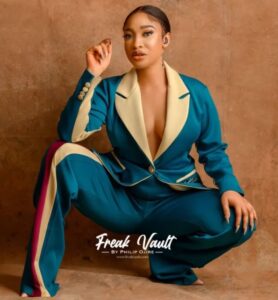 Tonto however insisted that all she alleged was the truth and in no way false information as Jane’s petition claimed.

Well, moments ago Janemena shared a cryptic post on her Insta-stories shading a certain person who she claims is running from signing court papers.

Responding, Tonto Dikeh described Jane Mena as an “adulterous twerker” and countered her claims of not wanting to sign court papers. 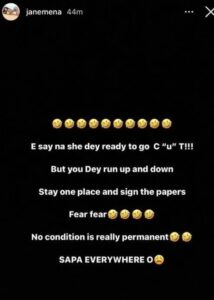 Tonto Dikeh wrote: “E be like say I don keep quiet too much.Only a charge and bail lawyer no go serve letter, no body fear your stupid letter.

It’s 2 months or more you still dey find Festus Keyamo office wey dey google. Go and beg kpokpogri to delete your s-x tape. Na you go tire. You look around and you decided to sub me? Didn’t you see the man you are fighting for behind bars? It’s me you wanna try with childish subs and lies. Mrs jane @janemena ,I AM MUMMY KING.” 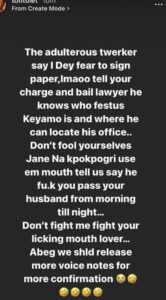 This drama is not ending anytime soon with the way these two are going. By the way, where’s Kpokpogri sef? 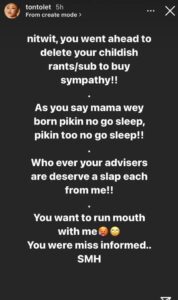 “I met him sitting on the chair unconscious” TB…

Woman, if you play small for a man to feel powerful, you…