Governor Babajide Sanwo-Olu, on Monday, yielded the seat of authority for Ms. Jemimah Marcus for a brief moment to step in as one-day Governor of Lagos State.

The 17-year-old student of Angus Memorial Secondary School in Somolu, Lagos East, won the 2020 edition of the Spelling Bee Competition, thereby earning the honour to become the one-day Governor.

The weekly Executive Council meeting of the State’s cabinet was presided over by Ms. Marcus, an indigene of Edo State, as Sanwo-Olu temporarily stepped aside and observed the proceedings. 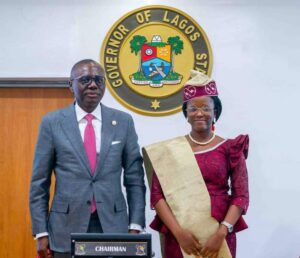 Spelling Bee competition, a contest between public schools across Lagos, is one of the legacy programmes in the State’s education sector pioneered in 2001 by the then First Lady, Senator Oluremi Tinubu through her New Era Foundation.

Since 2015, the State Government has taken full charge of the programme, collaborating with partners and stakeholders to further help realize its objectives.

Presiding over the cabinet meeting, Ms. Marcus commended the Sanwo-Olu administration for initiating “laudable” programmes through its THEMES agenda to turn around governance and service delivery.

Describing Sanwo-Olu as a “transformational leader”, the one-day Governor said the State had recorded giant strides in education, health, housing, infrastructure renewal, transportation, youth and women development in the last two years of the administration.

Babajide Olusola Sanwo-Olu was born on June 25, 1965. He is a Nigerian politician and the current Governor of Lagos State.

Babajide Sanwo-Olu is a graduate of the University of Lagos as well as the London Business School and the John F. Kennedy School of Government.

Before his gubernatorial ambition, he was the managing director and CEO of Lagos State Property Development Corporation (LSPDC).

Baba Ijesha: “I am ashamed of you”- Princess…