A Ghanaian couple have been arrested for flogging their daughter to death for bedwetting.

The couple from Yakase, Ghana’s Western North region have been identified as Effah Donaldson, 34, and 27-year-old wife Salome Oteku.

They reportedly forced their daughter, Francisca Etuteh to sit in hot water before flogging her. Enchi District Police said the young girl’s arm was broken as a result of the abuse, which resulted in her death. 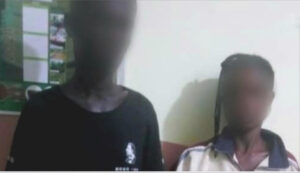 It was also learnt that the incident occurred on Tuesday January 4. ACP Henry Bacho, Enchi Police Divisional Commander, told Joynews that the couple brought their daughter to Aowin Community Clinic, but she died while receiving treatment.

Following the death of the child, they took her and wrapped her with Acheampong leaves, intending to bury her at midnight.

Bed wetting happens when a child pees during sleep without knowing it. Many children will use the toilet well during the day long before they are dry through the night. It can be many months, even years, before children stay dry overnight. Most children, but not all, stop bedwetting between the ages of 5 and 6 years old.

Bedwetting is most often related to deep sleep—the bladder is full but the child doesn’t wake up. Some children have smaller bladders, or produce more urine during the night. Constipation can also lead to bedwetting because the bowel presses on the bladder.

Nearly all bedwetting problems can be cured with single or combination therapy. Some people do, however; they will need long-term drug therapy.

A stressful home life, as in a home where the parents are in conflict, sometimes causes children to wet the bed. Major changes, such as starting school, a new baby, or moving to a new home, are other stresses that can also cause bedwetting. Sometimes, this is the root cause of bed wetting.

10 dating safety rules for women of all ages

Building a man and neglecting yourself is a problem -Angela…