Maya Angelou has become the first Black woman ever to appear on a US quarter, after a coin featuring the late poet and activist’s image went into circulation on Monday.

The quarter features an image of Angelou with her arms uplifted, a bird in flight and a rising sun behind her, with a portrait of George Washington on the “heads” side. The US Mint said the image of Angelou was “inspired by her poetry and symbolic of the way she lived”. 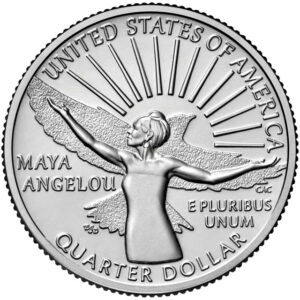 Other honorees include astronaut Sally Ride, the first American woman in space; Anna May Wong, the first Chinese-American film star in Hollywood; Cherokee Nation leader Wilma Mankiller; and suffragette and politician Nina Otero-Warren, who was the first Hispanic woman to run for U.S. Congress. Their coins are scheduled to roll out later this year and through 2025.

“It is my honor to present our Nation’s first circulating coins dedicated to celebrating American women and their contributions to American history,” U.S. Mint deputy director Ventris C. Gibson said in a statement.

“Each 2022 quarter is designed to reflect the breadth and depth of accomplishments being celebrated throughout this historic coin program. Maya Angelou, featured on the reverse of this first coin in the series, used words to inspire and uplift.” 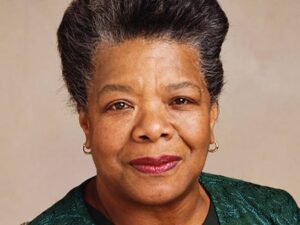 Angelou’s depiction, as designed and sculpted by artists Emily Damstra and Craig A. Campbell, features the poet with her arms uplifted as she stands in front of a bird in flight against the backdrop of a rising sun.

Angelou rose to international prominence after her groundbreaking autobiography, I Know Why the Caged Bird Sings, in 1969.

The coming-of-age story depicts the author’s early years and explores subjects such as rape, racism, identity and literacy through the eyes of a Black woman in a male dominated society. 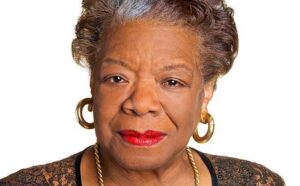 Caged Bird was nominated for a National Book Award in 1970 and continues to be one of American literature’s most treasured masterpieces. Angelou went on to publish over 30 bestselling works of verse, non-fiction and fiction.

In her decades long career — which include dance, theater, journalism and social activism, Maya Angelou made several firsts, including in 1992, when she became the first Black woman to write and present a poem at a presidential inauguration when she read poem, “On the Pulse of Morning,” at President Bill Clinton’s inauguration.

Maya Angelou was later awarded the Presidential Medal of Freedom in 2010 by President Barack Obama and was the 2013 recipient of the Literarian Award, an honorary National Book Award for contributions to the literary community.

5 symptoms of cervical cancer every woman must know

10 signs you are with the wrong person