Khloé Kardashian has been through it (multiple times) with ex Tristan Thompson, but even with his latest, very public cheating scandal with Maralee Nichols, the reality star is keeping the peace.

While Khloe Kardashian hasn’t responded to his Instagram apology publicly, the Good American founder has reportedly spoken to the NBA player behind the scenes.

An insider told Page Six that Khloe Kardashian let Thompson know that she “appreciated the message” and that “she is taking the high road” in this situation so that they can continue to co-parent daughter True, 3, amicably. But don’t think for a minute that she’s considering on getting back together with him — that ship has sailed. What she is going to do is to make sure that’s he’s going to be “a big part of their daughter’s life.” 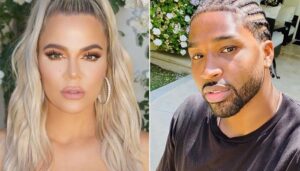 That means that the reality star “is not going to fight with Tristan or block him from the family” — Thompson will be welcome at Kardashian events.

That’s a pretty brave move considering how much he’s hurt her, but Kardashian is looking out for True and what is best for her in the long run.

Thompson has done his best to make amends to those he hurt after fathering a baby boy with Nichols while he was still dating Kardashian. “Khloé, you don’t deserve this,” he wrote on his Instagram Story.

He even showed up to his daughter’s gymnastics class with close to 100 roses right before the apology went live as a way to repent with the small gesture.

Thompson will have to deal with his shame and embarrassment within the entire Kardashian clan behind closed doors, but he sure is lucky his ex is thinking about only True in this situation.

I pity married women who look down on single ladies

Be angry with your poverty instead of complaining about your…