In an interview for Apple Fitness+, the actress, 41, admitted that walking – rather than doing endless high intensity workouts – has actually been her secret weapon for weight loss.

Rebel said a doctor at a health retreat had advised her to take up walking, insisting it was the ‘best way’ for her to shed the kilos.

‘The doctor said to me, ‘Rebel, the best way for you to lose unwanted body fat is just simply walking,’ she explained.

‘Doesn’t have to be high-intensity, doesn’t have to be uphill, just moderate walking an hour a day. And if you can do that, for you, for your body type, it’s, like, the best way to lose unwanted body fat.’

Rebel made headlines around the world after declaring 2020 her ‘Year of Health’, and has since lost around 35kgs.

In May, the Fat Pizza star candidly admitted to feeling ‘sad’ that she’d waited until the age of 40 to embrace a healthier lifestyle.

‘Now that I know I can do it, sometimes I feel sad that I didn’t do it earlier,’ she told InStyle.

Admitting she’s always been ‘a bit of a late developer,’ Rebel said she wished she ‘tried when I was 30, not 40.’

‘But everybody’s journey is different, and it’s not a race or competition.’ 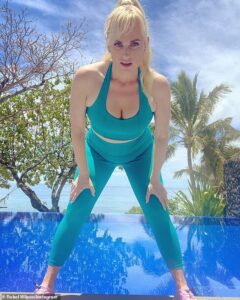 ‘I have a natural empathy for anyone who struggles with weight issues because that’s something I’ve always struggled with.’

Rebel said that ‘anyone can go on walks and drink more water and do little, consistent things that’ll improve their lives,’ – and it’s never too late to start.

Meanwhile, Rebel Wilson recently admitted her team was opposed to her decision to embark on a “year of health” because she’d been so successful playing the “funny fat girl” in a string of movies.

10 menstrual hygiene tips every girl and woman should know

What Women Should Know About Paranoid Personality Disorder