As the audition episodes continue on Season 20 of American Idol, there’s been no shortage of amazing talent.

Among the standout artists this time around is Kenedi Anderson, who wowed judges so much that she received a Platinum Ticket to Hollywood.

Like any proud parent, Kenedi’s dad took to social media to re-tweet the fact that she made it to the next stage of the ABC singing competition — and some football fans might recognize his name.

Kenedi introduced herself to American Idol judges as a 17-year-old from Crozet, Va. When Luke Bryan asked what it was like growing up there, she explained that she actually hasn’t lived there that long. 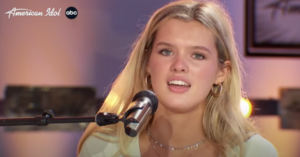 “I move a lot because of my dad’s job. He’s in the football industry, so I’m never in one place for a very long time,” Kenedi explained in a spotlight segment. “I have been moving basically my whole life. It’s so hard starting over and re-adjusting to new places … And it can really get lonely.”

Kenedi shared that having a big family has helped her through all of these moves, as she’s the second-oldest of six children.

“We’re all pretty close and we’ve been through a lot together,” she said. “Everyone in my family is really athletic and I’m the musical one. Music really is my therapy. Whenever I’m frustrated, whenever I’m feeling down, music has always been the one thing that has stuck with me no matter what.”

As Kenedi sang Lady Gaga’s “Applause,” the looks on the judges faces’ were priceless. Luke, Lionel Ritchie, and Katy Perry couldn’t believe she hadn’t already been recruited by a record label. Her voice was just that impressive.

“I don’t know how you haven’t been recruited,” a shocked Katy told Kenedi following her performance.

Luke agreed that she was a five-star recruit, and then Katy reiterated: “You check every box and a lot of all of them. Get ready to become your own hero.”

10 ways women can improve their self esteem

This is why women shouldn’t be naive in this world