Yinka Jegede-Ekpe is a Nigerian HIV/AIDS activist. After being diagnosed as HIV-positive, she became the first Nigerian woman to publicly announce her status.

Below are 10 things women should know about Yinka Jegede-Ekpe:

2. When she was 19 and living in the city of Ilesa, Nigeria, Jegede-Ekpe was concerned by rashes on her body and decided to take a blood test. She then found out that she was HIV-positive.

3. She is known for being the first Nigerian woman to come out as HIV-positive.

4. In the early 2000s, Jegede-Ekpe decided to make her HIV-positive status public, which at the time was a controversial course of action. She was the first Nigerian woman to do this. 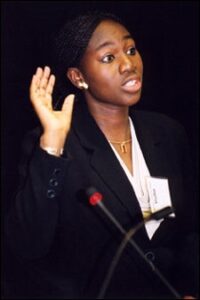 5. She experienced discrimination and was shunned by friends and colleagues fearful of HIV/AIDS: her choir refused to sing with her any more. She was studying medicine at Wesley Nursing School and the administration pressed her to stop. However, she continued to study and graduated as a nurse in 2001.

6. Yinka Jegede-Ekpe set up the Nigerian Community of Women Living With HIV/AIDS organisation to raise awareness of HIV/AIDS in Nigeria.

7. Speaking at the Harvard School of Public Health in Boston, Massachusetts, Jegede-Ekpe remarked that the HIV/AIDS epidemic in Nigeria would not be solved until women and men were treated equally.

8. Jegede-Ekpe became a consultant for UNICEF and in 2001 the organisation helped her to access antiretroviral drugs for her own health after a friend was shocked by her weight loss.

9. She married a fellow campaigner who is also HIV-positive. In 2006, she gave birth to a healthy baby girl, who tested HIV-negative.

10. In 2004, Jegede-Ekpe won a Reebok Human Rights Award for her work on HIV/AIDS awareness.

Yinka Jegede-Ekpe said: “When people like myself come out, you see the faces of the epidemic for the first time. I’m not a fact or figure. And they can see that people like me can live a normal life”.

“The heart of man is desperately wicked and they are…

I have never wanted to be married says Funmi Iyanda