Eilish appeared surprised to win the prize. “This is so—I could scream,” she began. “Thank you to our 007 family, [producer] Barbara Broccoli, MGM, [director] Cary Fukunaga, Daniel Craig, Hans Zimmer…for taking our song and making it worthy of James Bond.” Finneas added,

The 007 song by Billie Eilish and Finneas O’Connell has won a Golden Globe, a Grammy and now an Oscar for best original song. 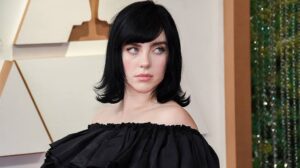 Prior to their win, Eilish and Finneas performed their song against a macabre backdrop after an introduction from Bond villain Rami Malek. The evening also featured a tribute to James Bond as the franchise celebrates its 60th anniversary.

Theirs is the third Bond song in recent years to win, following Adele and Paul Epworth for “Skyfall” and Sam Smith and Jimmy Napes for Spectre’s “Writing’s on the Wall.”

To win, they beat out some impressive names, including Beyoncé, Van Morrison and Lin-Manuel Miranda. They also prevented Diane Warren from nabbing her first Oscar on her 13th try.

“No Time to Die” debuted and peaked at No. 16 on the U.S. Billboard Hot 100 but debuted at the top of the UK Singles Chart and the Irish Singles Chart.

“No Time to Die” isn’t the only music for a film the brother and sister pair have made. Three songs written by Billie Eilish and Finneas made it on the “Turning Red” soundtrack, pulling heavily from the likes of (asterisk)NSYNC and Backstreet Boys.

Happy Birthday to the one and only Lady Gaga

Women should do away with unhealthy competition

Bre Tiesi Opens About Her ‘Beautiful Relationship’ With Nick…

Nigerian teen gets 19 scholarship offers from US and Canada