Regina Hall Gathers Eligible Bachelors and Jokes About Will Smith

During the 94th Academy Awards opener, co-host Regina Hall declared, “I’m single!” And as the show went on, Hall figured she’d use it as an opportunity to acquaint herself with some of the night’s other single attendees.

The actress, 51, called up a list of guests whose COVID-19 test results got “lost” and would need to be re-tested by her.

“Before we go on with the show we just have to do quick emergency testing backstage,” Hall said. “Don’t worry it’s only a few people. It’s totally random.”

She proceeded to call up: Bradley Cooper, Timothée Chalamet, Tyler Perry, Simu Liu and Javier Bardem. “Oh, you’re still with Penelope,” Hall said to Bardem, referring to his wife of 11 years, Penelope Cruz. “You know what, actually, no. No, no, no, your test is fine. It says that you’re married … negative.”

Hall wanted to double-check with one more audience member, though.

“Will Smith, you’re married but you know what you’re on the list and it looks like Jada approved you, so you get on up here,” she said to the King Richard star. 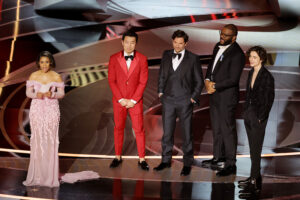 Smith, 53, and his wife Pinkett Smith, 50, laughed in the audience as the Oscar nominee waved off Hall’s invitation to the stage. Pinkett Smith pointed and winked at Hall.

The Girl’s Trip star explained how the COVID tests for Cooper, 47, Chalamet, 26, Perry, 52, and Liu, 32, would work. “You’ll come backstage, take your mask off if you have one — and your clothes — and then I’m going to swab,” Hall quipped. “No, it’s simple. I’m going to swab the back of your mouth with my tongue.”

“I just gotta get on down here, make sure you’re okay,” Hall told Brolin, 54, while she patted him down.

Hall similarly searched Momoa, 42, and ultimately declared both healthy and clear to continue their presenting duties.

Roz Brewer is the only Black woman leading a Fortune 500…

Police officer allegedly shoots his girlfriend in Delta for…

Many men think women are complicated because they…