Deborah Cox is making HERstory in her home country of Canada. The “We Can’t Be Friends” singer will be the first Black woman inducted into the Canadian Music Hall of Fame.

“I feel incredibly grateful to experience this true milestone moment,” Cox said in a press release. “Music has always been about community for me, and I am so thankful to the Canadian Music Hall of Fame and CARAS for not only recognizing myself, but my family, friends and loving fans who have supported me and helped make my dream possible for the past 25-plus years.”

“As the first Black female inductee, I am honored to have the chance to show our younger generations that they can achieve whatever they set their minds to with hard work, dedication and passion.”

“I hope that my music can continue to bring peace, happiness and comfort to anyone who might need it, and empower people of all ages to follow their dreams and believe in themselves.”

Deborah Cox began her singing career at the tender age of 12. She went on to sing as a background singer for Celine Dion before she was signed to Arista Records in 1994. 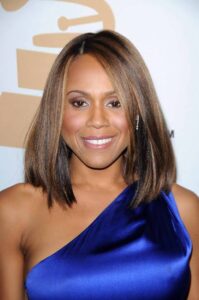 She released her self-titled album in 1995 and then followed it up in 1998 with her sophomore effort, One Wish. This album earned her first platinum plaque, a Grammy nomination and two number one hit singles, “We Can’t Be Friends” and “Nobody Supposed to be Here.”

Her other albums include The Morning After, Destination Moon and The Promise. In 2004, she made her Broadway debut in Aida. She went on to star in Jekyll & Hyde and The Bodyguard. She’s also starred as Josephine Baker in Josephine at the Asolo Repertory Theatre.

Deborah Cox will be inducted during the 51st Juno Awards, where she will also perform, on May 15 at Toronto’s Budweiser Stage.

Deborah Cox is a Canadian singer, songwriter, actress, and record producer. Born and raised in Toronto, she began performing on television commercials at age 12, and entered various talent shows in her teenage years before becoming a professional backing vocalist for Celine Dion.

An eight-time Juno Award nominee, she has won four awards and is often cited as Canada’s top R&B artist.

There’s no doubt about it – Deborah Cox is a dynamic, Grammy-award winning singer with surprising acting chops. Paper Mill Playhouse has provided a dazzling showcase for her talents with The Bodyguard.

HER BROKEN SOUL 5: Living in a loveless marriage