Even with her stardom in the tennis world, Venus Williams knows what it feels like to be underpaid and undervalued.

“I came into inequality at the young age of 16 when I played my first Grand Slam and that’s a rude awakening, so I don’t want any other young women to have to face that,” the 41-year-old athlete told Gayle King during an interview on CBS.

The California native secured her first Grand Slam win in 1998 and went on to earn four Olympic gold medals during her historic run on the court.

In 2007, Venus Williams made history by becoming the first woman to earn the same prize money as men’s singles winner Roger Federer.

While she was honored by the accolade, the seven-time Grand Slam champ felt as though the win issued a loud message about pay disparities among female players in the tennis industry.

Now, Williams is working hard to close the gender pay gap with her Privilege Tax organization.

During her appearance on CBS, the star revealed that 100 percent of the money she earns through the initiative will be donated to Girls Inc, a nonprofit dedicated to empowering girls and young women. 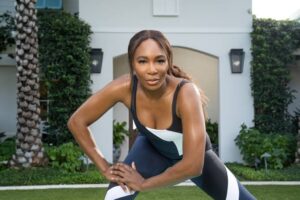 Brands who opt to partner with Privilege Tax can donate $1 in an effort to close the glaring pay gap. Customers who purchase items from Williams’ clothing brand EleVen can also partake in the game-changing program.

“It’s important to call attention to this. That people know this because women not only need equal opportunity, but it gives them the opportunity to grow and become strong and to help their families,” the tennis star continued.

In 2021, the U.S. Department of Labor published a stunning report from the U.S Census Bureau that found women overall make 83 cents for every dollar a man makes.

Upon breaking down the data by race, Black and Brown women were the lowest earners, making $0.64 and $0.57 for every dollar, respectively. Williams told viewers that she’s “happy” she can use her platform as a way to shed light on the growing issue.

Now, the U.S. Soccer Federation (USSF)  must pay their female players a whopping $24 million in retroactive bonuses to match the compensation of the league’s male soccer players.

Venus Williams is an American professional tennis player. A former world No. 1 in both singles and doubles, Williams has won seven Grand Slam singles titles, five at Wimbledon and two at the US Open. She is widely regarded as one of the all-time greats of the sport.

Kandi Burruss Reflects on Having Suicidal Thoughts as a Child

Sunmbo Adeoye reveals one of the best things about miracles

On the unending housewife versus independent woman arguments

My husband tore my clothes and dislocated my arm as he…