A 50-year-old woman is pregnant with her own grandchild after becoming a surrogate for her 24-year-old daughter who can’t conceive.

Chalise Smith, 50, from Utah, offered to be a surrogate for her daughter Kaitlyn Munoz, 24, after she was told she could no longer have children due to a devastating auto-immune disease.

Her daughter, Kaityln Munoz, was diagnosed with the disease that attacks healthy parts of her body called Sjogren’s Syndrome in 2019, and she also suffers from endometriosis.

Kaitlyn said: ‘In 2019, I was already struggling with infertility because of my endometriosis, and had been trying for three years to have children to no avail.’

The stay-at-home-mother and her husband Miguel, 30, a law graduate, decided to go ahead with an IVF round that resulted in four embryos.

Luckily, she was able to conceive and give birth to her first born who is now 2-years-old through IVF before she was diagnosed with the illness.

Chalise, a mother of eight, knows her daughter’s dream is to have a large family like hers and willingly offered to be her surrogate. 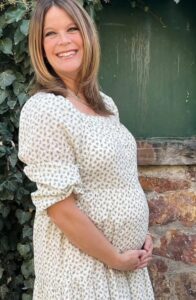 “I told Kaitlyn that everyone needed to be 100 per cent on board, Kyle (Chalise’s husband and Kaitlyn’s father), Miguel (Kaitlyn’s husband), and Kaitlyn herself.

“I was already 100 per cent in, but if there were any single doubts from anyone involved in the decision, I didn’t want to keep pushing.

“Everyone agreed and my husband was 110 per cent with me all the way through.

“With my age, I had to go through a lot of health checks before I could get the all clear for becoming a surrogate.

“But once we were given the all clear, I had two embryos implanted in September, and that has resulted in me now being pregnant with my granddaughter.”

Kaitlyn said: ‘I was so shocked when my mom offered to be my surrogate, she’s always been so supportive of what I want to do in life and my dreams of having a big family.

‘I know that all of her pregnancies went perfectly and that she is extremely healthy, so I never doubted that there would be any issues with her being my surrogate.”

Kaitlyn’s daughter is due in May, and the whole of the Munoz and Smith family are extremely excited for her arrival.

Chalise Smith is slated to give birth in May 2022 and the whole family can’t wait for the baby’ arrival.

Britney Spears shares she had a miscarriage: ‘A devastating time for any…

Cryptic Pregnancy: 10 things women should know about being pregnant and not knowing

Bre Tiesi Opens About Her ‘Beautiful Relationship’ With Nick Cannon

Nigerian lawyer practicing in New York is told to crop out…

Mum-of-eight pregnant with her grandchild after becoming a…