The Undertaker has been inducted into the 2022 WWE Hall of Fame following a storied professional wrestling career that has spanned over three decades.

The retired sportsman, whose real name is Mark Calaway, has been one of the most popular wrestlers in the company since he made his debut at Survivor Series in 1990.

As part of WrestleMania weekend, WWE chairman and chief executive Vince McMahon had the honour of inducting The Undertaker into the Hall of Fame during a ceremony at the American Airlines Centre in Dallas, Texas on Friday. “There is no one more deserving than the man we are about to induct tonight,” said McMahon.

The Undertaker entered the squared circle surrounded by mannequins that donned outfits from different time periods in the wrestler’s career and to a standing ovation from fellow wrestlers and fans in attendance.

Taking to the stage, a tearful Phenom (as he’s nicknamed) gave a speech that was centred around three mental states that helped with his success: perception is reality, respect and loyalty go a long way, and never be content. 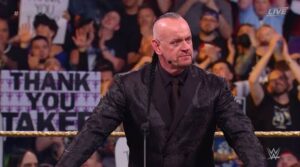 “Now that The Undertaker has entered the WWE Hall of Fame, you can rest assured that I will rest… in… peace,” he said during his speech.

Finally, as he exited the ring wearing his trademark hat and leather jacket, he had one final message for fans that teased he may not be done after all: “Never say never.”

The Undertaker has won nearly every major championship in WWE and has competed in some of the most memorable matches in history over his illustrious three-decade career.

In addition, he amassed a historic 21-year WrestleMania undefeated streak before it was broken at WrestleMania 30 by Brock Lesnar in 2014.

In 2020, Calaway was featured in the WWE Network docuseries Undertaker: The Last Ride, which was praised by fans and critics. He made his “final farewell” to fans at Survivor Series later that year, announcing his retirement.

If you must remain in a bad marriage, stay there and keep…

Wendy Williams reportedly restricted to a wheelchair and…

10 signs you are dating a man child