The match was filled with shenanigans as Ronda Rousey thought she had the match won before referee Charles Robinson waved off a three-count due to Charlotte having her foot on the rope.

Following a ref bump, Robinson missed Charlotte tapping out. Charlotte came back with a boot to the face, surprisingly winning the match as a +425 underdog against the heavily favored Rousey (-800).

Ronda Rousey’s return has been a boon for WWE’s business, with viewership and ticket sales rising whenever the former UFC megastar is advertised.

And while Rousey and Charlotte were brilliant during the build to their previous WrestleMania 35 showdown, that spark simply wasn’t there throughout the buildup to their singles match. 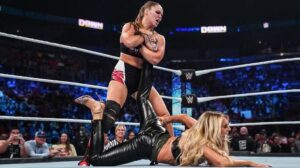 Much like WrestleMania 35, many fans preferred the one-on-one confrontation between Rousey and Becky Lynch that they thought they were getting in 2019.

The extended title match featured plenty of momentum swings as each competitor exerted their will on the other. Flair avoided or interrupted arm bar and ankle locks from Rousey; meanwhile, Rousey becomes the first superstar to ever escape Flair’s Figure Eight finishing maneuver.

A far cry from the heated promos and wild backstage brawls from the build to WrestleMania 35, Ronda Rousey and Charlotte’s storyline was a basic war of words with Rousey implementing a couple new submission holds to prove she is not a one-trick pony.

Poor build aside, if the match itself was going to be anything like their previous one-on-one match at Survivor Series 2018, fans were in for a treat.

Dave Meltzer of Wrestling Observer Radio (h/t Wrestling Inc) went on to report that Austin and Owens would indeed close Night 1 of WrestleMania.

Rousey’s return to WWE has not been without its roadblocks. Still scarred from the notoriously fickle nature of WWE’s fanbase, Rousey had to be coached into her role as a babyface after a bitter end to her previous stint.

People with autism can read most facial expressions, but not…

My brand is not for the elite alone -Banke Meshida-Lawal