Blac Chyna and her legal team are gearing up to head to trial against the Kardashians later this month.

New information details that media personality and industry mogul Ryan Seacrest is on the witness list and may be grilled by Chyna’s lawyers during the upcoming court proceedings, Radar Online reports.

Blac Chyna is suing her ex Rob Kardashian, his sisters, Kim, Khloé and Kylie, and their mom Kris Jenner.

The influencer filed her lawsuit against the famous family in 2017. She alleges the brood convinced E! executives to cancel the show about her and her ex’s lives, Rob & Chyna, which only aired for one season.

Seacrest was one of the executive producers on Rob & Chyna and “is expected to provide live testimony” during the trial, according to court documents obtained by PEOPLE.

Chyna’s lawsuit argues network executives already greenlit her show with Rob for a second season, but the influential family’s pressure on the higher ups is what got the series canned. 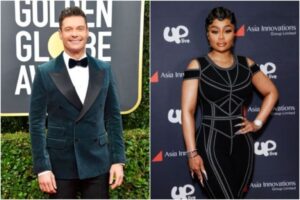 Chyna’s lawsuit outlined Kris as the “ringleader of the scheme” and the one who created “a fake story that she [Chyna] had abused her then-fiancé, Rob.”

The influencer now wants to be awarded $300 million in damages by the Kardashian-Jenners over their alleged behavior behind the scenes.

Other witnesses on the list who may potentially testify included Kim, Khloé, Kylie, Kris and the latter’s boyfriend, Corey Gamble.

The trial is scheduled to begin on April 15.

Angela Renée White known professionally as Blac Chyna, is an American model and socialite. She originally rose to prominence in 2010 as the stunt double for Nicki Minaj in the music video for the song “Monster” by Kanye West.