5 Things You Should Know About The Late Gospel Singer, Osinachi Nwachukwu

It came as a rude shock to Nigerian gospel music lovers on Friday when the news broke that popular singer, Osinachi Nwachukwu, has died.

The deceased shot into limelight after the hit track, “Ekwueme“, which was released in 2017.

Here are some things to know about the ace gospel singer.

1. Her husband, Peter, is also a minister and their union is blessed with four children.

2. The late singer has a twin sister known as Amarachi Grace Eze; who is also a powerful singer.

3. Osinachi Nwachukwu sings in Igbo language, and her audience are dominant in the eastern part of Nigeria. The singer hailed from Imo State.

4. Some other songs that shot her into national stardom are “Nara Ekele” by Pastor Paul Enenche; “You no dey use me play” by Emma; and “God of Power” (Ikem).

5. The late Osinachi Nwachukwu was a lead vocalist in Dunamis church.

New development have emerged about what could have caused the death of Osinachi Nwachukwu.

A number of Osinachi’s colleagues and close associates took to social media to declare that the gospel singer has been suffering from domestic violence from her husband until her death. 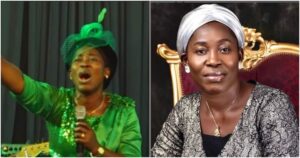 “If Madam Osinachi had left her abusive husband, the many churches that invited her for their program would have stopped. They would have seen her as unworthy.

It doesn’t matter if she’s a gifted singer and can usher in the Holy ghost with her worship. Everything she is and can be in church, is tied to her ability to remain married.

If she led the choir in her church or was in any leadership position, they would have stripped her of it, ridiculed her and made her a non-grata.

Had she left her abusive marriage, her church members and the same people now asking why she didn’t leave, would have called her a failure, because she couldn’t keep her home. She would have been termed unsubmissive, rebellious and a Feminist. It doesn’t matter if the husband is next to the devil, it’s her job to keep him!

Her fellow Ministers and church members would have mocked her and questioned why she couldn’t pray enough for her husband to change. They would cite many Bible passages to buttress their points and remind her that the heart of a king is in God’s hands and that God hates divorce.

Indeed, anybody free from the claws of religion, is free indeed!

So many beautiful/kind words people have said about her is quite soothing. Happy she served the Lord in truth. Her soulful rendition of Ekwueme would always be remembered.

May her gentle soul rest in peace!😥😥”

10 things you should know about Nollywood actress Nkechi…