Ryan Cabrera and Alexa Bliss have officially walked “On the Way Down” the aisle.

The singer, 39, and the WWE star, 30, exchanged vows at the Kempa Villa in Palm Desert, California, on April 9, PEOPLE can exclusively announce.

Two weeks ahead of the big day, the couple sat down with PEOPLE to give all the details on their wedding, which Bliss described as “very non-traditional” and “rockstar” themed.

“It’s very us,” Cabrera said. “The whole thing’s meant to bring out our personalities, and we are far from just normal.”

Cabrera and Alexa Bliss who started planning their wedding right after they got engaged in November 2020, fell in love with their venue (which is owned by a friend) after first stopping by to visit on their way to a “glamping” trip in nearby Joshua Tree.

Then, after they got engaged, they again saw their friend who owns the five-acre property, and he suggested it could be the “perfect” backdrop for their wedding. 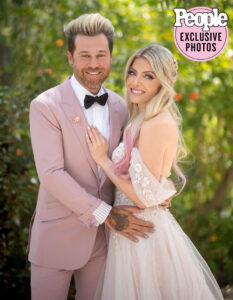 “We were like, ‘Oh my God,’ it’s absolutely perfect,” Cabrera said. “It’s absolutely gorgeous and nestled within the mountains. At the bottom, there are vineyards, and behind the house there’s a beautiful lake. It’s just far enough outside of Los Angeles, too.”

In contrast with the serene surroundings of the estate was a giant, light-up “Welcome to the S—show” sign and hot pink carpet that greeted their 360-count guest list (which Cabrera said he “weeded down” from 608) upon arrival.

“Our wedding has been self-deemed ‘the s— show,'” Cabrera explained.

As guests arrived, they were able to pour their own glass of Campo Viejo Cava champagne from the Bubble Tap trailer as they soaked in the acoustic sounds of singer Tyler Ward and harpist Lexie Lowell.

To kick off the ceremony, Cabrera and Bliss had people walk down the aisle tossing out shots to attendees in lieu of flower girls “to really set the stage.”

Their families then walked down the aisle to Walk Off the Earth’s version of Tina Turner’s “The Best.” The bridal and groom party — which had a mix of 16 men and women on each side — followed, walking down to “Eye-to-Eye” from A Goofy Movie, one of Bliss’ favorite films.

Alexis Kaufman is an American professional wrestler. She is currently signed to WWE, where she performs on the Raw brand under the ring name Alexa Bliss. In 2013, Bliss signed a contract with WWE and was assigned to their Performance Center and developmental brand NXT.

5 Things You Should Know About The Late Gospel Singer, Osinachi Nwachukwu

Kaylah Oniwo is tired of women who are not truthful about…

I was receiving blood transfusions while the world…

Don’t leave men who cheat on you, Bukunmi Oluwasina tells…