The 40-year-old actress has a starring role in the new Netflix drama ‘Anatomy of a Scandal’ – a story adapted from Sarah Vaughn’s novel of the same name about a wealthy politician accused of raping his political researcher lover.

Sienna Miller portrays Sophie Whitehouse, who stands by her husband James (Rupert Friend) when he is accused of the rape, and believes that the change in gender attitudes has helped bring the drama to the screen.

She told the BBC: “There is a male, a certain type of man – their confidence is built in them as much as their education.

“But it’s starting to shift, I see it in younger generations of men, it’s quite inspiring to see that inbuilt misogyny or superiority is slightly dissolving.” 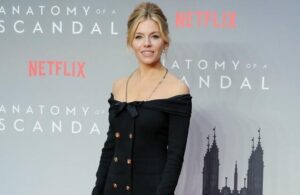 Sienna continued: “I certainly won’t take things like I used to. I used to walk into a room with only men and feel very intimated and now I don’t. There’s a strength in the unity of women right now.”

The actress also suggests that the new series highlights the “ignorance” of those who do not realize they are privileged and have an advantage in life.

Sienna Miller explained: “From the series flashbacks, you understand why some people are the way they are because they’ve never been told they’re not capable of achieving whatever they’ve dreamed of.

“I don’t think they ever spend time sitting around thinking about what it must be like for people who have to claw their way just to get to the starting line, you know. And it’s that blinkered behaviour – and it’s really unconscious – that this show really lays out.”

However, the ‘Layer Cake’ actress says the drama – which also features Michelle Dockery and Naomi Scott – is not a “social commentary”.

She said: “It raises questions, but it’s not a social commentary, it’s an entertaining drama. At least it should begin a discussion about James Whitehouse’s culpability, or lack of it. People are quite polarized around that, which is astounding to me.”

“Kpokpogri has so much of your s*x tapes in his possession,”…

How side chic allegedly drugged and stabbed Super TV CEO…