Megan Thee Stallion inked a Netflix deal in December and the Houston Hottie is planning on having us laughing.

According to Deadline, Netflix’s head of comedy Tracey Pakosta said the “Savage” rapper’s upcoming show will be a comedy series that is inspired by her life.

“It’s very early,” Pakosta told Deadline. “She came in and she pitched something loosely based on her life growing up, and we got very excited about it. We think she’s special.”

Pakosta, who joined Netflix in December 2021, is more than excited to collaborate with the recent college grad and welcome her into the world of production.

“Megan is a multi-talented creative force who has consistently made her mark on culture,” Pakosta said. “She’s always growing and evolving as an artist, and we’re thrilled that she’s making a home at Netflix for this next chapter in her journey.” 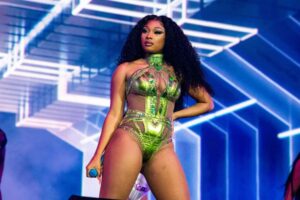 In her Netflix deal, Megan Thee Stallion will be creating and executive producing her new series and other projects a well.

“I’ve always had a passion for telling creative and entertaining stories, so I’m thrilled about this partnership with Netflix,” the 27-year-old said. “Venturing into production is the next step in my journey as an entrepreneur and I can’t wait to bring all my ideas to life and for my Hotties to watch.”

This is beautiful news in the midst of all of the ugliness surrounding her regarding the alleged Tory Lanez shooting. She recently did an emotional interview with Gayle for CBS Mornings where she recounted what happened that night. She shared that she was very vulnerable in 2020 after losing her mother and was friendly with people she shouldn’t have been bothered with.

“I really thought that we were all friends,” she said. “And it’s sometimes I feel like I put the blame on myself because when my mom passed, I just felt like I was looking for some type of family environment. And I was letting so many people in,” she said.

“I didn’t care who it was. I just wanted to feel like I got family and I got people that care about me and just I could hang out with everybody. And I was just going through it.”

Megan Jovon Ruth Pete, known professionally as Megan Thee Stallion, is an American rapper. Originally from Houston, Texas, she first garnered attention when videos of her freestyling became popular on social media platforms such as Instagram.

Dear women, this is not the time to be weak