The Kardashians star, 24, shared the story behind her 2022 Met Gala look on Instagram Monday night, paying homage to the late fashion designer in the caption of a carousel of pictures of herself getting ready.

Tagging Abloh’s Off-White brand, the makeup mogul began, “Virgil and i were supposed to go to the Met together before it got postponed in 2020. to celebrate V tonight and his incredible legacy truly means the world to me.”

“I’m humbled to wear this dress and honor my talented beautiful friend. we felt you tonight Virgil and love you forever,” she continued, thanking the Off-White team who coordinated her Gen Z bridal vibes – a billowing white ballgown and backwards baseball cap with birdcage veil – for Met Monday.

Jenner shared more details from behind the scenes in a follow-up post, including a closeup of the “Off” lettering on the illusion paneling of her fitted corset top to a choice of accessories and flowers seemingly sent by Shannon Abloh, the designer’s widow. 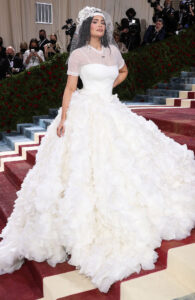 “Kylie, you are going to be amazingly perfect tonight,” a note in the colorful arrangement read. “He will be with you guiding you up the stairs. We all know he never missed a party.”

Abloh died in November 2021 at age 41 following a two-year battle with cancer, PEOPLE confirmed at the time. The designer was known for his work as the artistic director of Louis Vuitton’s menswear collection, a role he assumed in March 2018, and CEO of the Off-White label, which he founded in 2012.

Jenner last attended the Met Ball in 2019, and the iconic Costume Institute Gala at the Metropolitan Museum of Art was canceled in 2020 due to COVID concerns.

Three years later, the Kylie Cosmetics founder ascended the iconic steps on the first Monday in May once again for “In America: An Anthology of Fashion,” part two of a yearlong exhibit about the power of American fashion at the Manhattan museum.

The reality star wasn’t present for “In America: A Lexicon of Fashion,” the post-pandemic return of the gala in September 2021.

Natasha Akpoti ties the knot with Alema of Warri

10 ways to know your partner is not ‘the one’