Cadwell shared that the trio’s historic feat is quite possibly a national first as well, according to My San Antonio.

“I didn’t want to offend anyone if there was another all-Black, all-female team out there, but I just cannot think of one off the top of my head,” Cadwell told the outlet.

The local news reporters made their debut on May 2.

The trio serves the central area of The Lone Star state, including Temple, Waco, Killeen. 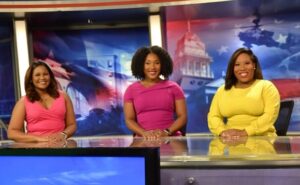 Cadwell explained that as a young and aspiring broadcast journalist she never saw anchors that looked like herself and her colleagues.

“Growing up, I always saw all-white news anchors,” she recalled. “I didn’t think that there would ever be Black newscasts. I knew there was always room for one, but I didn’t think that I would see three African Americans — male or female — permanently, all at one time. No way.”

Moise grew up with a similar experience, and told KCEN that as a child, when she did see a Black reporter on the news, “they were outside reporting in the cold.”

“But then, as I started to do it, people started to point it out — how there was not a lot of women who are Black and do the weather,” Carter said.

“It kind of added on the responsibility of ‘Ok, I didn’t get to see it growing up — and now little girls in this area are going to see me when they wake up and now it can become a reality.”

10 Facts About Judy Garland On Her 100th Birthday

“Most Black males in prison come from single…

15 things you should know about ectopic pregnancy