CM Punk was forced to step aside as AEW world champion just days after winning it.

A red eyed and emotional Punk announced on All Elite Wrestling’s “Rampage” on Friday night that he is injured and will have to give up the title he won at Sunday’s Double or Nothing pay-per-view.

An interim champion will be crowned at the Forbidden Door pay-per-view on June 26. A battle royal will open next week’s “AEW Dynamite” and the winner will face Jon Moxley in the main event to earn a spot in the match at Forbidden Door against another challenger to be determined.

The bad news is I’m injured and I need surgery,” Punk said. “A couple of things are broken, the biggest one is my heart because I love performing in front of all of you and I wanted to go on one hell of a run.” 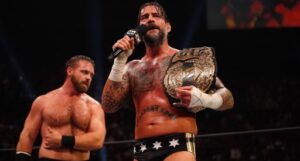 CM Punk, 43, just won the championship – his first world title since 2013 – by beating “Hangman” Adam Page at Double or Nothing in Las Vegas.

He was set to face New Japan Pro Wrestling star Hiroshi Tanahashi for the AEW championship at the companies’ first joint pay-per-view, “Forbidden Door”, at the United Center in his hometown of Chicago.

Punk however sees the injury as a setback that he will return from. CM Punk said he was willing to relinquish the title, but AEW president Tony Khan did not want him to.

CM Punk returned to professional wrestling after seven years away when he made his AEW debut last August. This was supposed to be his third career “Summer of Punk” with him as champion to potentially give AEW the best chance to raise its profile and reach a new audience on the back of Punk’s stardom. That won’t happen now.

“The last thing I ever wanted to feel was like I was letting any of you down,” Punk said. “The last thing I ever wanted to do was leave you feeling disappointed, so I hope thus far I haven’t made you feel that way. I have loved every single second I have been in this ring. Every single time I’ve been in this ring in front of all of you is a gift I never thought I’d get to experience again.”

Sheryl Sandberg was under investigation at Meta for using corporate resources to plan her wedding, report says

Simone Biles Pulled Out Of Gymnastics Finals Due To Mental…

Man arrested for allegedly killing his mother in-law in Ogun…