“Harry Potter” actress McCrory, the wife of “Homeland” and “Billions” star Damian Lewis, died in April 2021 at 52 after a battle with breast cancer.

Besides dealing with the grief of the sudden loss, producers had to rewrite the entire COVID-delayed season to reflect the loss of McCrory’s formidable matriarch Polly Gray – known as Aunt Polly to crime family head Thomas Shelby (Cillian Murphy).

The Season 6 premiere is dedicated to “the memory of Helen McCrory OBE,” and Polly’s presence looms large throughout the season.

In the final moments of Season 5, Shelby was in despair over his foiled assassination plot against fascist leader Oswald Mosley (Sam Claflin) , putting a gun to his head in a foggy field. 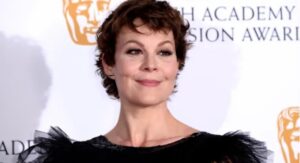 With the final season announced, it was clear this would not be the end for the unraveling crime boss and politician.

Season 6 picks up in the same muddy field, with Tommy actually pulling the trigger. But his brother Arthur (Paul Anderson) had removed the bullets, fearing the worst. “They wouldn’t let me pass,” Tommy moans before the sound of a telephone ringing interrupts.

The phone call is from Irish Republican Army member Captain Swing (Charlene McKenna), informing him the group had kiboshed the assassination (“we need to keep Mr. Mosley alive”) and that the bodies of “your people” killed in the fray were being delivered.

Among the dead is Aunt Polly, killed as a direct message to the empire-building leader. “You’ve had a crutch to lean on; last night we kicked away that crutch,” Swing says, making it clear it’s Tommy’s fault, since “you consistently fail to understand your own limitations.”

Polly is shown only as a portrait in the ensuing funeral pyre, as her son Michael Gray (Finn Cole) lights her carriage aflame in tribute to their Romany gypsy heritage.

Crystal Renay is Heartbroken And Disgusted About Her Husband…