The election of Mayra Flores, who bested her Democrat competitor in a 51%-43% vote, comes as Republicans continue to make inroads among Latino voters in south Texas.

Flores, reportedly the first Latina Republican to serve Texas in Congress, is expected to face a more challenging race in November, however. Her victory was to replace Democrat Filemon Vela, who retired before his term ended – meaning she was elected to serve out the remainder.

Flores sailed to victory in Texas’ 34th District, where former Democratic Rep. Filemon Vela resigned from his seat in March to work for a lobbying firm.

In one of the most Latino districts in the country, and one where Democrats have routinely won by comfortable margins for years, Flores garnered 51 percent of the vote, winning the special election without a runoff.

The district lines are shifting for the next election in November 2022, but she will hold this seat until January. 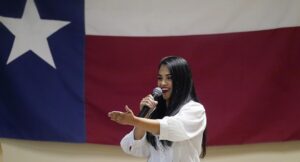 Flores immigrated from Tamaulipas, Mexico when she was six years old and grew up in the Rio Grande Valley region.

In addition to working as a respiratory care practitioner, Flores served as the Hidalgo County GOP Hispanic Outreach chair to increase and maintain Republican support among Latinos in the area — which has been ramping up in recent years.

Before Flores won her district Tuesday, President Joe Biden carried it by 4 points over Donald Trump in 2020 — a huge shift from the previous presidential elections under these district lines, when Trump in 2016 and Mitt Romney in 2012 were blown out by 20-plus points each.

While Flores grew up seeing most of her immigrant family vote blue, she eventually realized her views on religion, abortion and border security were more in line with the Republican Party. She got involved with her local party five years ago, she told POLITICO.

Flores is part of a larger movement of GOP Latinas from South Texas who are building on the party’s recent gains and vying for congressional seats this year, including Monica De La Cruz and Cassy Garcia, who won nominations for two other potential swing districts in the Rio Grande Valley earlier this year.

Flores’ special election became a rallying point for local Republicans eager to make more gains later in 2022. Flores had far out raised her fellow special election candidates, plastering the airwaves with TV and digital advertisements in the month leading up to Tuesday’s vote.

Brittney Griner’s Detention in Russia Extended for a Third Time

Cheryl Burke Revealed She Has Never Experienced an Orgasm During Intercourse

Hushpuppi: We’ve been contacted by FBI to arrest Kyari…

I hate the pretentiousness of people when they hear about…