Netflix just dropped the first look at Blonde, and what an uncanny look it is. In this new teaser trailer for the Andrew Dominik-directed film starring Ana de Armas as Marilyn Monroe, the Hollywood icon is initially depicted as a tearful bundle of nerves, praying that some mysterious “she” won’t abandon her.

As her make-up is applied and Monroe transforms into a smiling, radiant star, we realize exactly who she’s has been waiting for.

Dominik wrote and directed Blonde based on the novel by Joyce Carol Oates, and the film blends fact and fiction to reimagine the life of the great Hollywood star, exploring the split between Monroe’s public and private selves. 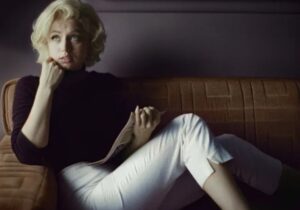 The Cuban actress shared, “Andrew’s ambitions were very clear from the start — to present a version of Marilyn Monroe’s life through her lens. He wanted the world to experience what it actually felt like to not only be Marilyn, but also Norma Jeane. I found that to be the most daring, unapologetic, and feminist take on her story that I had ever seen.”

Blonde will be released globally on Netflix September 23.

How I almost became a second wife

10 sure ways to handle your toddler’s body odour

Dear woman, you are stronger than you give yourself credit…