“You won’t break my soul,” Beyoncé repeats throughout the song, while also calling for a reinvention (“And I just quit my job/I’m gonna find a new drive”) and semi-rapping with attitude, “the queens in the front and the doms in the back/ain’t takin’ no flicks but the whole clique snapped.”

The pulsing song is the first offering from “Renaissance,” her seventh studio album which is due July 29. It follows Beyoncé’s July 2020 visual album, “Black is King” – including “Black Parade,” which she unveiled on Juneteenth 2020 – and her collaboration with Megan Thee Stallion that year on a remix of “Savage.” 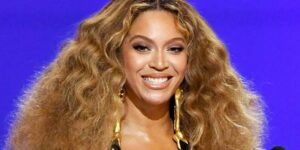 A new interview with British Vogue, on which Beyoncé is the regal cover star, describes her fresh material as having “soaring vocals and fierce beats” with “music that makes you rise, that turns your mind to cultures and subcultures, music that will unite so many on the dance floor and make them fall in love.”

Variety reports that the album will also include country-leaning tracks, as well as songwriting contributions from Ryan Tedder – who co-wrote her 2008 hit, “Halo” – and Raphael Saadiq, who produced Beyoncé’s sister Solange’s critically revered “A Seat at the Table.”

The announcement of “Renaissance” was delivered in typically shrewd fashion. Last week, Beyoncé removed all of her profile pictures from social media, prompting the first round of sleuthing from the “Beyhive.”

Then, in the early morning hours on Thursday, the music streaming service Tidal – previously owned by Beyoncé’s husband, Jay-Z – blanketed the news that “Act I” of her new album will drop this summer.

The merchandise store on the Grammy-winning-singer’s website shows four box sets, including a T-shirt, CD and a mirrored box, available for pre-sale, along with the new single.

15 Things You Should Know About Angelica Ross

“The moment you don’t have money to give, you become the…

10 ways to overcome insecurities in relationships