A woman is furious with her husband after he secretly made a horrible comment about her cooking.

She asked Reddit’s “Am I the A******? (AITA)” forum for advice. She went out of her way to learn how to cook her husband’s favorite foods after he refused to eat her traditional meals. But one day, she overheard him discussing her cooking, and she couldn’t believe what he said.

My husband doesn’t know how to cook,” she explained. “He’s also not a fan of the food I cook from my country of origin. Seeing him living off fast food motivated me to learn to cook his family’s common meals. It took me a while to get it done properly, but now I can cook an entire list of his favorite meals. He praises my cooking and encourages me to learn more.

“While we were eating dinner at his parents’ house, I had to excuse myself to go wash my hands after I was done. I left the table, and my husband was still eating. As I was making my way back, I heard his dad tell him to take it easy because he was eating a lot.” 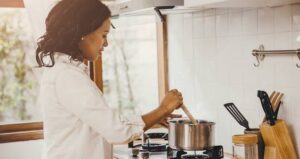 Then she overheard her husband make a nasty comment about her.

“He then asked my husband if I cook for him and if he eats well at home,” she wrote. “My husband said that I do cook for him, but the food I make can only be fed to pigs, not humans. I was hurt and so offended. I showed up in front of him and told him I would no longer be cooking for him after this comment.

He was turning in his seat as I walked right past him, took my purse and said I was headed home. He got back later saying it wasn’t like that, and that even if it was, then I should be happy he still eats my food when it’s still ‘not perfect’ yet. He said he was trying to protect my feelings, and I hurt him when I said I won’t cook anymore.”

Redditors thought the husband was immature and lazy.

“He’s your husband, not your child — and he needs to grow up,” a user said.

“He can cook for himself or eat fast food every day,” another commented.

“Right, if learning his family’s recipes is so easy, he should learn them,” a person wrote.

‘The devil is at work to soil my husband’s…

Sometimes, you let go of people without even noticing

Angelina Jolie and The Weeknd spark dating rumors after they…