The Uxbridge Magistrate court has denied former deputy senate president Ike Ekweremadu and his wife, Beatrice’s bail application after they were charged for bringing a child to the UK for organ harvesting.

The prosecutor alleges a 15 year old homeless boy was transported from Lagos to Heathrow with the purpose of harvesting kidneys as one of the daughters of Ekweremadu has kidney disease.

The couple was found with £20,000 in cash on June 21 prior to a flight to Turkey. Mr and Mrs Ekweremadu were denied bail on June 23 and the case was adjourned until July 7. They deny the allegations.

Recall that the Metropolitan police in a statement on Thursday said that Beatrice Nwanneka Ekweremadu and Ike Ekweremadu were charged to court on Thursday following an investigation by the force’s specialist crime team.

The police added that the investigation was launched after detectives were alerted to potential offences under modern slavery legislation in May 2022. 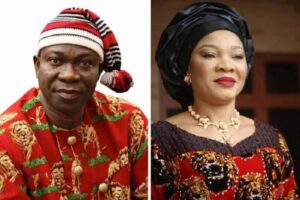 The statement read in part, “Beatrice Nwanneka Ekweremadu, 55 (10.9.66) of Nigeria is charged with conspiracy to arrange/facilitate travel of another person with a view to exploitation, namely organ harvesting.

Ike Ekweremadu, 60 (12.05.62) of Nigeria is charged with conspiracy to arrange/facilitate travel of another person with a view to exploitation, namely organ harvesting.”

Ike Ekweremadu is a Nigerian politician and lawyer from Enugu State who has served in the Senate of Nigeria since May 2003. He is a member of the People’s Democratic Party and was the Deputy President of the Nigerian Senate for three consecutive senate.

On 17 August 2019, while attending the Second Annual Cultural Festival and Convention organized by Ndi-Igbo Germany in Nuremberg, Ike Ekweremadu became the victim of a violent attack when members of the Indigenous People of Biafra IPOB stormed the venue of the event and began to question Ekweremadu about the killings of Igbos when the Nigerian army staged Operation Crocodile Smile and Python Dance.

2023: Thunder will fire any celebrity that collects money to…

Jason Njoku apologizes to Ndi Igbo after they saved his app…