Jessie James Decker is getting brutally honest with fans about her struggles with body image and mental health.

In a lengthy post on Instagram on Thursday, the country singer opened up about the ups and downs she’s been facing, pointing to her ongoing struggle with loving her body.

“I want to be open and honest. I have struggled the last couple of years,” Decker began. “It’s been a little worse lately where I just break down and cry. I’ve been battling some body image issues, and when I really think about it, I probably always have.”

She went on to say that she’s gone from “one extreme to being obsessed with working out and being muscular and thin to just giving up and gaining because the food makes me feel better.” Ultimately, she wrote, “it’s a cycle that just gets worse again.” 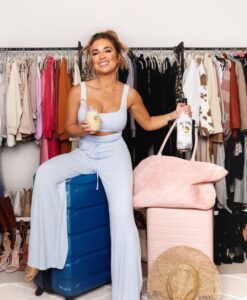 Decker, who shares three kids with former football player Eric Decker, went on to explain that recent criticism she’s received from online trolls has added to the pressures.

“I don’t handle social media or trolls like I used to,” she explained, later referencing a “hate page” on Reddit that criticized her parenting and career choices. “I’m ripped apart constantly on a daily basis which kills me a little every day and makes me wonder what my purpose in this business is and truthfully makes me consider quitting everything sometimes and disappear. With how progressive we are getting in this digital world of preventing bullying, I still don’t know how a page like that is allowed and fear my sweet daughter seeing it someday.”

Decker also shared that she’s been struggling with career challenges and self-doubt.

“I’ve been wanting to be a country singer since I was nine years old and sometimes, I feel like I’m constantly in a battle with the rest of the industry to prove to them that I’m not just a TV personality or an influencer because that has outshined my music,” she wrote.

“As a woman in 2022, I don’t understand why I can’t have a family, publish books, own a fashion brand, be an influencer, and do TV without being questioned if I take my music career seriously just because I’ve chosen to dream big.”

She can fool around too…pay attention to your woman

This is not what forgiveness means

Nigerian man slammed with a 12-month community order for…

“There is no female that would lose value before my…