The attorney for the family of Brian Laundrie on Friday released eight pages from Laundrie’s notebook that was found near his remains in Florida in October last year, according to a news release obtained by CNN affiliate WINK.

In the notebook, Laundrie wrote in part, “I’m sorry to everyone this will affect. Gabby was the love of my life but I know adored by many. I’m so very sorry to her family, because I love them.”
On another page, he wrote about Petito being injured and trying to help her.
“I don’t know the extent of Gabby’s ingerys (sic) only that she was in extreme pain. I ended her life, I thought it was merciful, that it is what she wanted, but I see now all the mistakes I made. I panicked. I was in shock. But from the moment I decided, took away her pain, I knew I couldn’t go on without her,” he wrote.
Petito’s cause of death was ruled to be strangulation and the manner of death was homicide, Teton County Coroner Dr. Brent Blue said. 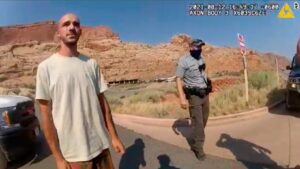 Laundrie family attorney Steven Bertolino said he released the notebook pages after a meeting with the FBI and an attorney for Petito’s family where they collected the personal belongings of Petito and Laundrie.

“As part of this return of property in FBI custody I was given Brian’s notebook. I would like to share with the public the note that the FBI alluded to on January 21, 2022, that Brian claimed responsibility for the death of Gabby Petito,” Bertolino said.

Bertolino released eight pages of the notebook and it is not known their order in the notebook that was recovered.
On the last page released, Brian Laundrie wrote, “I have killed myself by this creek in the hopes that annimals (sic) may tear me apart. That it may make some of her family happy.”
The last words on the page, written with a different pen than the previous ones said, “Please pick up all of my things. Gabby hated people who litter.”
Advertisements
0
Share

Woman, you don’t need to reduce yourself just to get…

Husband of the single and married