In the court’s most closely watched and controversial case in years, a majority of the justices held that the right to end a pregnancy was not found in the text of the Constitution nor the nation’s history.

Taking the stage on Saturday at the U.K. festival in southwest England, Rodrigo told the thousands watching she is “devastated and terrified.”

“So many women and so many girls are going to die because of this,” she added. 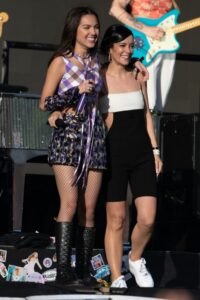 She then was joined by Allen in a surprise appearance to perform Allen’s 2009 hit “(Expletive) You.” The single was a reaction to political adversaries in the U.S. and U.K. when it debuted.

Megan Thee Stallion, who is from Texas, called the state’s abortion ban in 2021 “embarrassing” and led a chant against SCOTUS.

The law, called S.B. 8, allows private citizens to sue any individual who assists a woman in an abortion after a fetal heartbeat is detected, even in cases of rape and incest.

This includes partners who support the abortion process, friends who post tips online on where to get abortions and Uber drivers who take women to abortion clinics. It also includes the doctors who perform the abortion itself.

“Now, y’all know it wouldn’t be me if I didn’t take a second to call out these stupid men,” Megan told the Glastonbury crowd Sunday. “What else you want? Texas really embarrassing me right now, y’all know that’s my home state.”

The “Hot Girl Summer” rapper prompted the crowd to boo as she gave a thumbs down towards the legislation.

She added that her supporters do not support the legislation “that y’all campaigning for” in Texas. “My body, my (expletive) choice,” she said as the crowd joined in.

10 ways to handle shame as a woman

What Kim Kardashian will get from divorcing Kanye West

Porsha Williams Wears the Tiniest Denim Bikini While on…

“Waking me up by 3am to settle quarrel is not Godly…