Cicely Tyson To Be Honoured With Renaming Of E. 101st Street In Harlem

Cicely Tyson, the iconic Tony Award-winning actress, who passed away at the age of 96 in January 2021, will be honoured with a beautiful street renaming ceremony on Sep. 17.

The celebration will take place on East 101st Street between 3rd and Lexington Avenues, the same cross street where the star grew up.

The tribute to the late East Harlem native will take place from noon to 5 p.m. and will begin with an unveiling ceremony of the street marker and a special presentation from New York City Council deputy, Diana Ayala.

Performances by the Dance Theatre of Harlem and the Caribbean-American Sports and Youth Movement Steel Orchestra will follow.

The Poet Laureate of El Barrio Jesús Papoleto Meléndez and the Dominican Folklore Dance Troupe are also scheduled to perform during the event.

Cicely Tyson was born in 1924 to parents from the Caribbean island Nevis. The star was raised at 178 East 101st Street, a five-story walk-up between Lexington and 3rd Avenue. 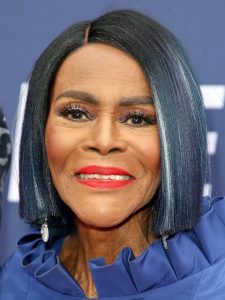 Throughout her decorated career, Tyson became known for her strong portrayal of Black women on screen.

The star first appeared in the critically acclaimed film Sounder as the loving mother Rebecca Morgan in 1972.

Cicely Tyson earned nominations for the Academy Awards and The Golden Globes for her stunning performance in the film.

Two years later, the star received a BAFTA Award for Best Actress in a Leading Role following her appearance in the 1974 television film The Autobiography of Miss Jane Pittman.

At 88, Tyson made history when she won a Tony for her role in the Broadway play The Trip To Bountiful.

According to a press release, the street renaming initiative was spearheaded by Ayala; Taina Traverso; Nina M. Saxon and Deborah Quinones, who cofounded the Cicely Tyson Street Renaming and Landmark Committee.

Cicely Tyson, the stage, screen and television actress whose vivid portrayals of strong African-American women shattered racial stereotypes in the dramatic arts of the 1970s, propelling her to stardom and fame as an exemplar for civil rights, died at the age of 96.

Groom-to-be tragically dies after being STRUCK by lightning…

Why women should discard men with excuses

Woman who sat for exam while heavily pregnant becomes first…