Pregnancy is nothing new for Blake Lively — and neither is the paparazzi attention that comes with it.

The soon-to-be mom of four revealed her latest baby bump at the Forbes Power Women’s Summit on Sept. 15, and since then, photographers have apparently been camped outside her and husband Ryan Reynolds’ house.

Within two days, Lively was ready to take matters in her own hands, and she posted 10 pregnancy snaps so she and her family can (hopefully) get some peace.

“Here are photos of me pregnant in real life so the 11 guys waiting outside my home for a … sighting will leave me alone,” the Rhythm Section star began her caption. “You freak me and my kids out.”

Blake Lively, who has been candid about her discomfort with paparazzi taking photos of her kids in the past, went on to express her gratitude for those who don’t encourage such images to be shared. 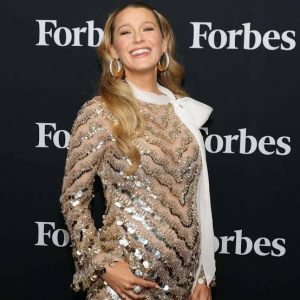 “Thanks to everyone else for all the love and respect and for continuing to unfollow accounts and publications who share photos of children,” she added.

“You have all the power against them. And thank you to the media who have a ‘No Kids Policy’. You all make all the difference … Much love! Xxb”

True to form,  Blake Lively’s carousel didn’t include any photos of her kids, but there were snaps of her with family and friends, including her close pal Taylor Swift.

The two appeared to be poolside as they were standing under an umbrella with Blake Lively dressed in a pink bikini.

Meanwhile, Reynolds made two separate appearances, both with an arm around his wife.

The couple is already parents to three daughters: James, Inez, and Betty, who range from 7 to 2 years old. Throughout the years, they’ve been careful about their children’s privacy and even managed to keep Betty’s arrival from the press until about two months after she was born. Still, they can’t completely avoid paparazzi, so Lively has spoken up about her concerns.

In November 2021, Reynolds shares the secret that’s made his nine-year marriage to Lively so wonderful. “We don’t take each other too seriously, but we’re also friends,” he told ET Online.

“Falling in love is great, but do you like each other? That’s kinda the question you gotta ask yourself, you know, going into it.

Teenage girl arrested for turning down a man’s sexual advances after he ‘dashed’ her N17,500

This woman’s experience with a hypnotist in Lagos is…