Viola Davis’ highly anticipated film The Woman King premiered over the weekend, but while some fans praised the actress for her stellar on-screen performance, a few critics lit into the film for whitewashing the history behind some of the characters depicted in the action-packed flick.

The historical film, which hit theatres on Sept. 16, tells the story of the Agojie, the epic female warrior unit that protected the West African kingdom of Dahomey during the 17th to 19th centuries.

Viola Davis plays the fierce general, Nanisca, who trains the next generation of warriors to fight back against their enemies.

The film appears to celebrate the fearlessness and tenacity of the all-female military unit, but some history buffs weren’t too pleased with the way the movie’s director Gina Prince-Bythewood, downplayed the Dahomey’s involvement in the Atlantic Slave Trade.

Throughout the 17th and 18th centuries, the Dahomey and their all-female military regiment became notorious for capturing and selling African slaves to Europeans. 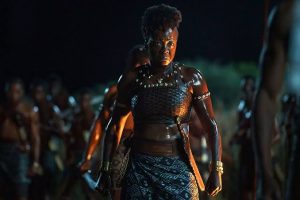 Between 1851 and 1852, the British imposed a naval blockade on the ports of Dahomey forcing the tribe to end the exportation of slaves from their bases. Some social media users urged viewers to “boycott” The Woman King.

After the movie premiered on Friday, a few critics took to social media bashing The Women King’s production company Sony for “attempting to rewrite” history by leaving the harsh historical fact out of the film. Some naysayers urged viewers to boycott the action movie, like podcaster Antonio Moore who called the historical epic “the most offensive film to Black Americans in 40-50 years.”

Other users argued that the film did touch on the Dahomey’s involvement in the slave trade. In fact, some folks on social media said that the difficult history played a large part in the film’s storyline.

Eventually, after the backlash took the internet by storm, the film’s director Gina Prince-Bythewood quickly addressed the criticism.

Despite the negative reviews, The Woman King opened on Friday with a bang, according to The Hollywood Reporter. The film dominated box offices across the U.S., pulling in $19 million after earning “a coveted A+ CinemaScore from audiences,” the publication noted.

10 Positive Affirmations For The Month Of September

Teenage girl arrested for turning down a man’s sexual advances after he ‘dashed’ her N17,500

10 Ways Women Are Expected To Show They Are Virtuous Wives

Getting married or buying a car cannot make one feel better…

Brittney Griner’s Detention in Russia Extended for a…