Kelly Clarkson had her family by her side during her special Hollywood moment.

The daytime talk show host, 40, was inducted into the Hollywood Walk of Fame on Monday, where her two kids River Rose, 8, and Remington Alexander, 6, attended the milestone event to support their mom. Clarkson’s mom, Jeanne Clarkson, was also present at the induction.

Clarkson, who shares her kids with ex-husband Brandon Blackstock, wore a black maxi dress for the ceremony while her two kids were both dressed in red Gucci ensembles.

River wore a red dress and black booties while Remy opted for a pair of red joggers with green patches and a white polo with a red collar.

The family of three smiled for photos together on the red carpet after Clarkson received her highly-anticipated star. 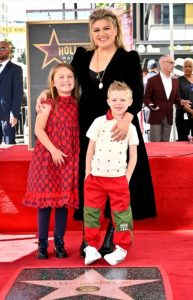 Also present at the event were all three original American Idol judges — Simon Cowell, Paula Abdul and Randy Jackson — who reunited to celebrate Clarkson, who became the very first Idol winner 20 years ago.

Clarkson recently opened up in a cover story interview for Variety about how being a parent to her two young kids changes her approach to her busy work days.

The musician told the outlet that she recently made the decision to push back the time of her eponymous NBC talk show so that she could drop her kids off at school.

“This season, we pushed everything back 30 minutes. I made that call so that I can take my kids to school,” she said. “And then my nanny picks them up. At least I have the mornings with them, and then I have nights with them.”

Speaking of her experience with “mom guilt,” Kelly Clarkson said she feels “very fortunate” that she has the “means” to see her kids as often as she does.

“My mom, I did call her once — this was years ago — and I was like, ‘Do I see my kids enough?’ And she was like, ‘Oh, my God, Kelly, you see your kids way more than I saw you!’ A lot of people don’t have the means, so I’m very fortunate,” she shared.

Actress Dorcas Fapson calls out LASUTH after three of her…

This is how Nigerian mothers are damaging their children