There’s a new kid on the block at “The Voice,” and she’s bringing the fuego.

Cabello, whose musical career began with a stint on the “The X Factor” in 2012, is looking forward to nurturing the next generation of talent.

“It feels very full circle ‘cause I started on a singing competition show,” said Cabello in a prerecorded interview. “I hope these people become better artists and get to live their dreams.”

But not everyone is jazzed with Cabello’s arrival, especially Shelton.

“I don’t want to help her in any way,” Shelton told host Carson Daly jokingly when asked if he’d given Cabello any advice. “Because so far I’m not impressed.” 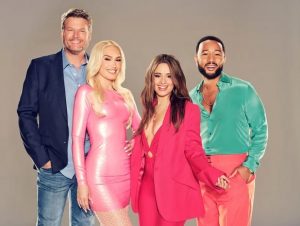 “That’s what a very threatened person would say,” Cabello shot back. “You’re just trying to intimidate me. It’s not working.”

The first vocalist to captivate the coaches this season was Nashville singer Morgan Myles, whose raspy vocals and soulful rendition of Leonard Cohen’s “Hallelujah” prompted all four judges to turn around in their chairs.

“We don’t get a lot of people singing that song because it’s so intimidating,” Legend told Myles. “It was exquisite: one of the best blind auditions I’ve seen in quite a long time.”

Shelton attempted to sway Myles – and keep the spotlight on himself – with a “heart-to-heart talk” that referenced their shared struggling musician backgrounds. The country singer hit a button on his chair that lit up his spot onstage, leaving his fellow coaches in the dark.

“When I moved to Nashville, I was 17 years old, and I started singing demos for songwriters,” Shelton said. “Your gift is that you can make people really believe what you’re singing about, and you just need somebody to help you along that journey.”

“I want what’s best for you and if what you want is Blake’s support and help to be a country artist, absolutely,” Cabello said.

Chloë Sevigny on getting pregnant at 45 and dealing with…

10 health benefits of corn women should be enjoying

Vince McMahon steps down as WWE CEO while the company…

Courteney Cox Opens Up About Her 8-Year Romance with Johnny…