Tiffany Haddish has reached a private settlement deal with the pair of siblings who accused her and comedian Aries Spears of grooming and molestation earlier this month.

According to a report published by RadarOnline, it appears Haddish has “worked out” a private deal with the accusers.

Details of the settlement are still unclear, but the publication noted that part of the agreement could involve Haddish publically apologizing for “her role in the skits.”

They also want her to “recant” some of the allegations she made in the suit. It’s still unclear as to how Haddish’s private decision will impact Spears. 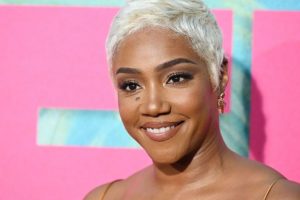 As previously reported, in early September Haddish and Spears were sued by a pair of siblings who filed a lawsuit against the stars under the pseudonyms John and Jane Doe.

The brother and sister duo claimed they were “groomed” and coerced into taking part in an explicit skit called “Through a Pedophiles Eyes.”

The inappropriate video, which was uploaded to Funny or Die, captured Spears lusting over a shirtless young boy. Tiffany Haddish played the child’s mother in the sexually suggestive video. The unidentified plaintiffs claimed they were 14 and 7 when they filmed the controversial skit.

At one point, the suit alleged that “Haddish and Spears removed the 7-year-old victim from his sister, placed him upstairs in a bedroom, and stripped the child down to his underwear,” However, both stars have vehemently denied the allegations. Haddish was a close friend of the siblings’ mother during the time of the incident.

Under the settlement, both parties have agreed to block the public “from seeing the original complaint” to keep private and protect the identity of John Doe, who is a minor. Federal officials also agreed to temporarily seal the complaint because it contained “several photographs of the minor in “an undressed state.”

Man arrested for luring a 14-yr-old girl via the internet, abducting, r@ping and impregnating her five times

Many women are unmarried because they can’t find rich…

Activist, Aisha Yesufu celebrates as her son defies all…

It is sad to see good women lose themselves because of…