The View co-host Sunny Hostin called out former Trump official Nikki Haley for shortening her name, claiming she was attempting to hide her heritage.

Haley then clapped back calling Hostin “racist” and noted that Hostin also changed her name from its original form.

Tuesday, show host Alyssa Farah Griffin suggested Republicans should give up on Trump already and support other conservatives like Haley and Rep. Liz Cheney, the report says.

Hostin then took a jab at the two. “Nikki Haley the chameleon and Liz Cheney the savior,” Hostin said. “What is her real name again?” Griffin then stepped in to try and defend Haley but the two continued to go back and forth.

After Griffin noted that “a lot of people don’t go by their actual real names,” she added that Haley’s first name is Indian while admitting that she wasn’t sure what it was at that moment. (Haley’s given birth name is Nimrata Nikki Randhawa. She married Michael Haley in 1996.) 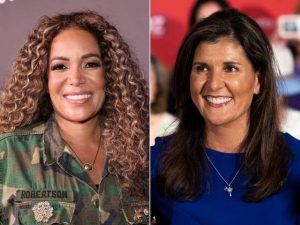 Continuing to hammer the former governor, Hostin then called on Haley to “lean into” being a woman of color. Co-host Sara Haines interjected at that point, focusing the discussion back on the list of potential GOP presidential candidates.

“That’s because most Americans can’t pronounce Asunción because of the under education in our culture,” Hostin replied, defending her personal use of a nickname.

Oh, the conversation didn’t end there. Griffin insisted Haley probably made the choice being an Indian woman growing up in South Carolina and wanting to “avoid prejudice.”

Hostin then responded, “There are some of us who can be chameleons and decide not to embrace our ethnicity so that we can pass.” Haley had something to say about that right there.

Thanks for your concern @Sunny. It’s racist of you to judge my name. Nikki is an Indian name and is on my birth certificate—and I’m proud of that. What’s sad is the left’s hypocrisy towards conservative minorities. By the way, last I checked Sunny isn’t your birth name.

Actress Thandiwe Newton addresses colorism in the casting of…

After 16 years of waiting, miscarriages and stillbirths,…