The Church of England has banned Archbishop Desmond Tutu’s daughter from conducting her godfather’s funeral because she is married to a woman.

Martin Kenyon, who died earlier this month at age 92, left explicit wishes for his goddaughter, Reverend Mpho Tutu van Furth, who is an Anglican priest, to conduct his funeral.

But the request from his family to hold the ceremony at his local church in Shropshire, England was turned down by the Diocese of Hereford because the daughter of the Nobel Peace Prize winner is in a same-sex marriage.

In an interview with CNN, Tutu van Furth said Kenyon’s daughters had planned to hold the funeral at St. Michael and All Angels church in the village of Wentnor, where he lived.

“His house in Shropshire was next door and he had been a member of that parish for 30 years,” she said of her godfather. 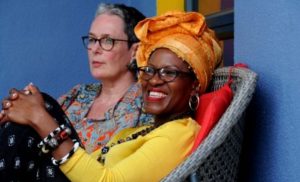 Same-sex weddings were made legal in England and Wales in 2014, but the Church of England’s official stance is against it and its ministers cannot carry out or bless such ceremonies.

In a statement sent to CNN, the Diocese of Hereford, in which the church is based, said: “We acknowledge this is a difficult situation. Advice was given in line with the House of Bishops current guidance on same sex marriage.”

Tutu van Furth was ordained in the US Episcopal Church in Alexandria, Virginia in 2004. The Episcopal Church, which, like the Church of England, is part of the Anglican Communion, allows its clergy to enter into same-sex marriage.

The decision to prevent Tutu van Furth from holding the ceremony in the church was branded “homophobic” by her wife, Marceline Tutu van Furth, a professor in pediatric infectious diseases in the Netherlands, where the couple live.

In an open letter to God published on LinkedIn, she described herself as an atheist who had received a “very warm welcome into this religious family.”

In the letter, she referenced a quote from her late father-in-law, who famously said that he would not worship a homophobic God, and added: “My request to you is: please help the people of the Church of England who definitely are homophobic to clear their minds and allow any clergy person to marry any person they respect and love.”

HER BROKEN SOUL 8: Living in a loveless marriage