Ime Udoka, the head coach of the Boston Celtics, has been suspended from the NBA after he had an alleged affair with another member of the organization.

“The Boston Celtics announced today that the team has suspended Head Coach Ime Udoka for the 2022-23 season for violations of team policies,” an official press release for the Boston Celtics read on Thursday, September 22, per USA Today, noting that “A decision about his future with the Celtics beyond this season will be made at a later date” and that “the suspension takes effect immediately.”

Udoka, for his part, released a statement of his own following the news. “I want to apologize to our players, fans, the entire Celtics organization, and my family for letting them down,” he said. “I am sorry for putting the team in this difficult situation, and I accept the team’s decision. Out of respect for everyone involved, I will have no further comment.” 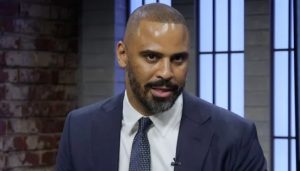 The former assistant coach of the Brooklyn Nets — who has been in a relationship with fiancée Nia Long since 2010 — purportedly had an “intimate and consensual relationship with a female member” of the NBA, according to an Athletic report published on Thursday, September 22. The alleged affair is not only seen as “improper” by the franchise, but is a violation of its code of conduct.

News of Udoka’s suspension comes less than one day after ESPN reporter Adrian Wojnarowski claimed that the Celtics coach could be suspended for the entirety of the 2022- 2023 season.

The former San Antonio Spurs player got engaged to Long, 51, in 2015 — four years after they welcomed 10-year-old son Kez in 2011. Udoka has also been a stepfather figure to the Fresh Prince of Bel-Air alum’s 21-year-old son Massai, whom she shares with ex Massai Z. Dorsey.

On her part, Nia Long took to her Instagram Story hours later to share a video with a cryptic message.

“When you see people change their whole life, and start walking down a path of enlightenment — I’m talking about hugging trees, connecting with nature, loving themselves, embracing positivity, letting that light shine.”

Woman, don’t be afraid to lose a man who is not…

‘The devil is at work to soil my husband’s…

Feminists are people trying to hide their insecurities with…