Rihanna will be headlining the Super Bowl Halftime Show in February 2023.

The music icon, 34, shared an image on Instagram Sunday hinting that she will perform during the NFL event next year.

In the photo, what appears to be Rihanna’s hand holds up a football. The “Umbrella” singer captioned the post with a single period.

Roc Nation later posted the same image on its respective Instagram account, writing, “Let’s GO,” and tagging Rihanna and the NFL, while adding the hashtag “#SBLVII.”

There were rumors and a report insinuating otherwise, singer-songwriter Taylor Swift would not be leading the Super Bowl LVII halftime show.

Some Swifites quickly ran with reports, questioning whether Swift — who has starred in past commercials for Apple Music — would be playing the show, which will be replacing Pepsi with Apple Music as next year’s sponsor. 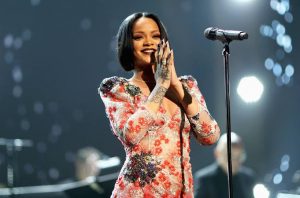 Rihanna has the right amount of career-defining hits to take on the evening. The singer and businesswoman has a total of 14 No. 1 songs on the U.S. Billboard Hot 100 chart, as well as 31 top 10 tracks in general.

Notably, the superstar hasn’t released a new album in six years since the drop of her fan-beloved eighth studio album, Anti, which also spawned hits like “Kiss It Better,” “Needed Me,” and “Love on the Brain.”

In the years since, Rihanna has become the youngest self-made billionaire woman in the country, thanks to her continued successes with her Fenty Beauty cosmetics line and her Savage x Fenty lingerie line, and saw the birth of her first child with A$AP Rocky in 2022.

The Super Bowl LVII halftime show sponsorship from Apple Music is part of a multi-year deal with the NFL, the league announced earlier this week.

Pepsi had previously announced that it would no longer be returning as a sponsor following its initial sponsorship at the 2007 show starring Prince and an eventual ten-year agreement that began in 2013.

I was stoned, stayed indoors for three months after my nude…

14 Black Women Make History Climbing To The Top Of Mt.…

Why are women encouraged with stories of bad marriages?

No husband owns his wife’s body