Marlon Wayans is the latest celebrity to weigh in on Boston Celtics head coach Ime Udoka’s suspension for cheating on his longtime partner Nia Long with a team staffer.

Wayans discussed the drama during a recent appearance on the Leah’s Lemonade podcast hosted by Leah Henry.

The stand-up comedian and actor suggested Long should ignore the public embarrassment Udoka has caused if she was happy in the relationship before news of the cheating scandal made headlines.

“If that man is 90% of everything that you need and want and he’s missing 10%, and you throw that man away, that’s your fault,” Wayans said.

Marlon Wayans said: “In order to find [a forever love] you’re going to have to live in a way that it bends and it doesn’t break. That’s your best friend,” the comedian continued. “And I would say to Nia Long — if [Udoka’s] all of those things — never mind the embarrassment. Never mind all that. I would say it to my daughter. I would say it to my sister. Are you happy? Before this moment, were you happy? Right — so work on your relationship. He’s a good man… He provides, he’s there for you, you seem so happy when y’all are together.” 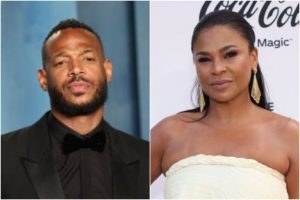 “I like him, the family likes him, he has all these great qualities,” Wayans said of the qualities a good man may have. “But because he slept with another woman — she probably thinks the same things [about him] that you’re thinking. He’s a dope dude. Why would you throw a dope dude away for her to have him?”

“We live in a society where women are taught that things are a fairytale. Prince Charming comes right in on a white horse, kisses Cinderella, and then it’s happily ever after. That’s the imagery we have,” the comedian said elsewhere during the podcast.

“People are human. You have to love people like water. We’re not solid objects. Love is not a solid object,” he continued. “You have so many men — married men — that have these thirsts or have these extramarital affairs because they’re not being honest with themselves and transparent with their partner.”

Wayans’ comments come as footage of Long being asked by paparazzi about how she’s holding up amid Udoka’s cheating scandal and whether she and the coach will work things out romantically has made its rounds on the internet.

Nia Long says she has no comment on the paparazzi’s questions as she leaves the store with her son.